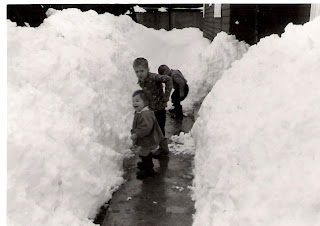 As I said in the first part of this post, we had a lot of Snow in Matsue... this photo was taken around 1962-3 with my younger brother and sister playing in the snow.
We lived a bit away from the center of town. There were lots of rice paddies around us.
Most of our friends were Japanese. We spoke English with our parents, and Japanese with our housekeeper and with the other kids in the neighborhood.
We had a TV... black and white, of course, and all of the programs were in Japanese. I still remember my favorite TV shows from this period... a puppet show called "Chirorinmura," and an animated show about a boy robot superhero, "Tetsuwan Atomu" (Astro Boy).
People sometimes ask me "how did you learn to speak Japanese so well?" I'm tempted to ask back, "so, how did you learn to speak English so well?" But, I usually swallow that urge (you know, you try it a couple of times and see the blank expressions on faces, and know they don't comprehend?), and say... "...well, I grew up in Japan." Which starts the dreaded "wow, how long did you live there" thread, in which I tell my life story about going to Japan at the age of 6, no, my parents weren't Mercenaries, they were Missionaries, and so on.
So learning Japanese, (at least the spoken language) for me, wasn't something I did. It just happened, from necessity. From hearing it spoken before I could utter a word, from playing with the neighbors, watching TV, from sharing a japanese-english language with my siblings that nobody else could understand, ...from living. I didn't learn Japanese... I lived Japanese, and it became part of my fabric that remains to this day, so that, after months or years of not speaking, I can slip back into it as if I were still there, using it every day.
I don't remember a lot about Matsue, except for the snow, for the sea, running around the yard with other kids (we had the biggest yard, and an actual lawn!), rice paddies and frogs filling summer nights with noise, riding trains, endless Sundays at church, dirt roads and gravel roads, and people always staring at me. Of course, I thought all this was normal. And it was.
See my Japan map.

Posted by bakagaijin at 9:37 AM