To get a good feel for the layout of the city, one of the first things I did in Brisbane was to take a guided tour. Several companies provide tours of the city, so I browsed the available tours at the Toruist Info Kiosk at the Queen Street Mall and found a fairly comprehensive all day tour, "Brisbane's Best," operated by Australian Day Tours.

The tour van picksme up on time in front of my hotel at around 9:15 AM, and, after a brief stop at the central bus station to exchange passengers, we head out for a look at the city.

The van is comfortable, and the size of the tour small (8-10 people) making interaction with Bob the Tour Guide easy and informal.

Brisbane was founded as a prison for convicts who were no longer welcome further south in the Sydney area, and grew over time into the State Capital of Queensland, in the Northeast quadrant of the Australian continent. The morning portion of the tour takes us to early historical sites of the city, with stops at the Windmill in Wickham Park, built by convicts to mill grain for bread, the old Treasury and Lands Administration buildings, now part of the Conrad Treasury Casino, the Parliament building, and City Botanical Gardens.

After midmorning tea at the Breakfast Creek Hotel, we board a boat for a cruise up the Brisbane River, taking in various cityscapes, the Kangaroo Point Cliffs (where early settlers hunted Kangaroo), and many examples of Queensland architecture along the river.

The boat trip ends at a point along the South Bank Parklands, where the tour group disembarks for lunch (not provided). As I explore the area, I encounter a Nepalese Peace Pagoda, quite unexpected in this part of the world. Apparently it was left behind after the World Exposition in 1988.

One of the great things about Australia and Brisbane is the wide variety of food available, and the large number of restaurants in the city. My favorite lunch places in the city are the various food courts, usually underground, which provide both Australian and ethnic food quickly, and at fair dinkum prices. Happily I am able to find a food court, and feast on some kind of kabob wrapped in flat bread -- delicious. After lunch I explore the South Bank. Being a weekend, the outdoor market is in session, and I wander the various stalls drinking in local crafts, fashions, trinkets, and other sundry items for sale until it is time to join the tour van again.

Following this, I meet up with the van, and we are off to the Lone Pine Koala Sanctuary, located just a few miles from the city. Here we are turned loose to mingle amongst the beasts: kangaroos, wallabies, goats, sheep, and other species run wild in the preserve. Various birds, and wombats, and, of course, koalas, are confined in their various habitats. Here you can race a kangaroo, view a sheepdog demo, or have the obligitory tourist photo taken while holding a koala. Our visit goes into feeding time, so the koalas awaken from their treeborne naps and start munching on eucalyptus while flocks of colorful wild lorikeets and parrots fly in for the evening foodfest.

The final destination of the day is the top of Mount Coot-Tha, the highest point near the city, from which Brisbane, the Coral Sea, and surrounding panorama is observed.

Overall this tour was very worthwhile, as it gave me a good feel for the city and surrounding areas, and provided an internal map for further exploration.

Posted by bakagaijin at 8:14 AM No comments: 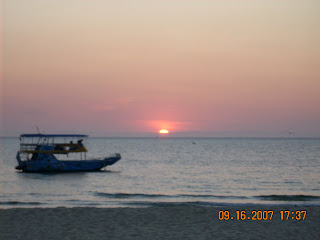 I've always wanted to visit Australia, and when I had the chance to take an extended business trip last fall, I jumped at the chance.

For about 20 days, I worked in Brisbane, Queensland, Australia.

Getting there and back was the tough part. I struck a deal with management to fly Business Class for the outbound trip since the distance from Virginia is so great. So I boarded a Korean Air 747 from Washington Dulles to Seoul, Korea (about 14 hour direct flight including a delay on the ground at Dulles), and after a brief layover in Seoul, boarded a Korean Air Airbus 330 directly to Brisbane. Both flights were comfortable, and I opted for the Korean food each time.

Upon arrival in Brisbane, I took a taxi from the airport to my hotel, the Hilton Brisbane. The Hilton is located conveniently in the Central Business District (CBD), which is a good thing if you are on a business trip. It is also adjacent to the Queen Street Mall, with many shopping, dining, and entertainment establishments.

Brisbane is the capital of Queensland, one of the six states of Australia. Located on the northeast part of the continent, it also hosts the Great Barrier Reef, which starts a few hundred miles North of Brisbane. Before my arrival in Aus, I thought that perhaps I'd be able to take a weekend and see the Reef, but, like many others, the sheer scale of the Australian continent didn't register in my pea-brain until I was actually there. Cairns, a popular jumping-off place to the Reef, is 1000 miles to the North. Ditto for the Aus Capital, Sydney: 1000 miles to the South. It looks like I will have to save those trips for another visit... And I do plan to return!

For this trip I will have to stay fairly close to Brisbane. So a city tour is naturally a good place to start.... So, on my first weekend, I decided to book a city tour. Fortunately, there is a Tourist Information Center right in the middle of Queen Street Mall, so booking a tour is a cinch. I selected the Brisbane's Best day tour conducted by Australian Tours.

Continued in section two of Brisbane, Australia: September 2007.
Posted by bakagaijin at 1:11 PM No comments:

Books: 1000 Places To See Before You Die

Subtitled "A Traveler's Life List," this book provides bite-sized writeups for 1000 locations around the globe, and also includes several places for each of the United States. Since she covers so many places in a single volume, Patricia Schultz necessarily makes the description of each potential travel destination very concise -- which makes this a good "john" book: an interesting read with which to contemplate exotic places while enthroned on the porcelain pedestal. And a good place to get ideas for your own thousand places...

Posted by bakagaijin at 8:47 AM No comments:

New -- at the bottom of the page, I am building a map of the places I've lived, and I will soon start to include places I've visited. I will try to link the places to permalinks as I discuss them on this blog.


You can register and make your own maps at fmatlas.com.
Posted by bakagaijin at 8:37 AM No comments:

12/27/2007... Day trip to Strasburg, VA and Washington, VA, about an hour from Manassas. Strasburg is a quaint little town near Front Royal and convenient to I-66 and I-81. It has some nice antique shops and a fairly extensive antique mall.

We lunched at the Hotel Strasburg, a victorian inn with a decent and affordable restaurant.

From Strasburg, we headed to Washington, VA, to take a look at the Inn at Little Washington, which is highly recommended by friends for its superb cuisine. The town of Washington is a small and cozy one-street town with many nice old houses. We'll be sure to return to the Inn for a special occasion dinner!

Posted by bakagaijin at 5:13 PM No comments: