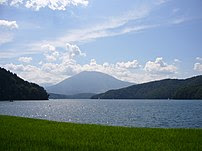 It was the magic summer retreat of our childhood. We started going to Lake Nojiri soon after we moved from Matsue to Itami, near Osaka. The summers in Kansai were unbearably humid, and an escape to the mountains, living for a short time in a community of other expats, was just the prescription for our family to recharge and re-energize in preparation for the daily grind.

And so we set off, one hot July or August day around 1966 or 1967 from Itami, taking the Meishin Expressway to Nagoya, thence local roads through such towns as Shiojiri, Matsumoto, Nagano, finally arriving at Shinanomachi, a small villiage with quaint Minka and a difficult Japanese dialect. The trip was long, much longer than planned, hot and dusty (our car didn't have air conditioning) and the six of us (mom and dad in front, the four of us in back) constantly bickered to see who could be made most miserable. [To this day I dislike driving or riding long distances by automobile.] By the time we arrive, it is near midnight and pitch black. We get lost in the gravel trails around the lake, making an orbit around before finally stumbling on the gaijinmura (foreigners' village), where our bleary-eyed friends greet us and hustle us off to bed for the night. The night air is cool. Almost cold. A nice change from Osaka, I think.

I don't remember much from our first visit other than that we stayed in a cabin for a week at the base of the mountains and didn't have to do much climbing. The way to the lake was through the woods, filled with fresh smells, black earth, an abundance of various ferns, and occasional white birch trees. Nojiri was spectacular, and there was no way not to fall in love with it.

The lake was deep and cold, even at the height of the dog days of summer. The mountains came out of the water and rose to breathtaking heights. Kurohime and Miyoko-kogen may have even had patches of snow from the long winter. The drinking water was sweet and cold, fed by natural springs, and had to be fetched by the bucket.

It was the start of a yearly trek, and the source of many fond memories... and the subject of later posts :-)

Posted by bakagaijin at 8:24 PM