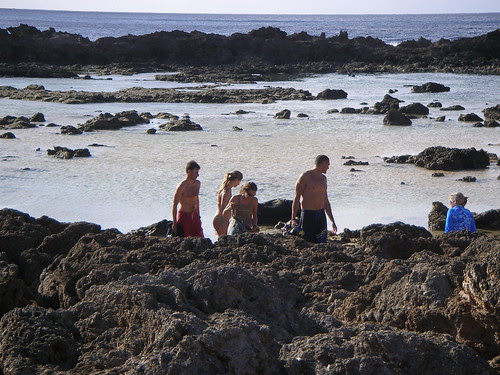 Move over Hanauma Bay! One of our memorable experiences during our visit to Hawaii this time was snorkeling in Sharks Cove, at Pupukea Beach Park on the North Shore of Oahu.

Though our trip was near the end of the Winter season, when North Shore beaches are mostly rough with big waves, we took a chance to visit this area on a day when the surf was relatively calm.

Pupukea has a section of sandy/rocky beach on the left, a fairly protected system of coral and lava rock in the middle, and a more exposed, deeper area on the right. For this trip, we snorkeled in the center area, a network of coral heads and lava rocks with deep holes, teeming with colorful tropical fish. On this day there were maybe a handful of people visiting the park, and it was nice to have a relatively uncrowded snorkeling experience. We saw many triggerfish, Parrotfish, a few grouper, hundreds of sea urchins, tangs, jackfish, clownfish, and other varieties. The number and variety rivaled that of the protected Hanauma Bay on the southeast point of Oahu, a favorite of tourists.

If you have a day on the North Shore, and the waves aren't crashing over the lava wall, I highly recommend you take a dip in Sharks Cove... (no sharks!!)
Posted by bakagaijin at 4:35 PM